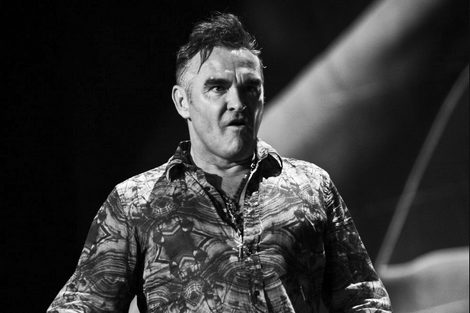 Year: 1984
Artists: The Smiths
Album: Non-album single
Other Hits: How soon is now, Everyday is like Sunday

On the evening of May 8, 2012 I went home disappointed from Fort Canning Park. This is the first time I ever felt I messed up my day by attending a concert to one of my favourite 80’s musician. I woke up this morning and the feeling of having been ripped off from last night’s event just won’t go away. How did a simple concert can go wrong? Let me count the ways… First, the venue. I loved attending concerts to Fort Canning Park I have seen Simple Minds, Pet Shop Boys, Cindy Lauper, INXS, Debbie Gibson, Rick Astley, Sugar Ray, etc. here. It’s the only venue in Singapore that for a minimum pay you can squeeze your way in the front row and see the pores of your favourite artists. The ground is elevated so you will be looking down to the stage instead of looking up, the crowd will be just comfortable seating on the grass because the stage is effortlessly in full view at eye level. For Morrissey, they moved it to Fort Gate and built a stage there so the tendency is for a bunch of people to trample up together and the access to the front row was difficult. Second, He was late but not worth the wait because, thirdly, he did not sing his hits! I’m talking about… Suedehead, Panic, The More You Ignore Me… The Closer I get, Girlfriend In A Comma, This Charming Man, and Heaven Knows I’m Miserable now.

I knew it! I knew it all along…I waited the last minute to purchase those damn tickets because I felt it in my gut he will pull something like this, I

knew he was coming months ahead but I procrastinated and completely ignored the early bird promotion. I was contemplating if the 98 bucks I will cough up will be all worth it if ever my hint was correct but all along my brain kept telling me to just risk it …I only have this day to experience Morrissey and never again… so I went out on office lunch break and made my way to Sistic and purchased my freakin’ regret.

He commenced the show by singing ‘How Soon is Now’ and the rest was blah…then halfway thru the ending he sang ‘Every day is like Sunday’ then he mentioned coming from a cold, cold place and how it was scorching in our venue, then he bid goodbye and took off… I sense a lot of people are dissatisfied with the outcome and only his hard core fans could love him that night, so please forgive me if I can’t forgive him… yet. I’m just an admirer of his work who happened to like a few ‘select’ songs. I blamed the temperature for making him uncomfortable thus, not finishing up his play lists, if his playlist included what I really wanted to hear. I should have read concert reviews online before deciding. Sometimes it’s hard to comprehend these artists – being ordinary, I cannot figure out how the extra-ordinary think. When it’s as simple as people spent time and money to see what they want, artist should at least give them what they want and in between artists can do whatever the hell he wants! And if you are going to do things differently give people a heads up, don’t be a selfish arse.

I’m not done ranting, I got to let this fume off, but how do you get piss off when my subject is one of the most influential figures in the history of British pop who redefined the sound of British rock for the past quarter-century? Yes, his voice was golden but only lifelong fans would totally appreciate the show and recognized the songs he played. For some of them their two decades of captivation with Morrissey abruptly ended in one night. I like the man – his undecidable sexuality, advocate for animal rights and supporter of PETA, his obsession with James Dean, his contribution to music, and with his long discography with the Smiths and solo work I think he can give his audience a little more…

I remember he mentioned this after playing 2 or 3 songs.–I can’t recall the exact words but it’s something like… ‘Do you ever think why you are? Later you will ask yourself why you are here”…Yeah, I did ask myself why I was there because heaven knows I’m miserable now…