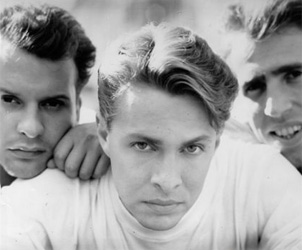 You cannot get through the 80’s without liking a few songs from this band. In April 1987 they saw international success with their first hit single “Shattered Dreams. This band is not that smashing but the subtleness of their music will creep into your subconscious. Their music is the EMO of 80’s coined ‘New Romanticism’. As per Wikipedia, “It was a youth fashion and music movement in the United Kingdom that began in the late 1970s in England and during the early 1980s. Originally often associated with the new wave music scene that had become popular at that time, it has seen several revivals since then, and continues to influence popular culture.”

This is one of the band who performed equally better in live and in records. Apart from ‘Turn Back the Clock’ I liked that they played ‘Different Season’. I happened to catch this song in 2000 as one of those songs listed in your compilation CD but never bothered paying attention to it because it’s not a hit more so, the artist is erstwhile. Well surprise! Surprise! They played it in the concert and it was awesome! – I love watching live performances just when you thought you knew the artist and their songs… They will deliver an old track and will make it sound new, giving you reason to like them all the more…

“This song is about the one that you cared for and actually cared for you back. But it just wasn’t in the cards for you. Oh Godit’s been twenty years and she’s as vivid as yesterday. Sometimes you find yourself reaching back for her but your hand comes back empty. You just thank God she was there at all. She was just there to save your life when you felt you could go no further. And she sent you on when you were healed.” –- Comment from you tube